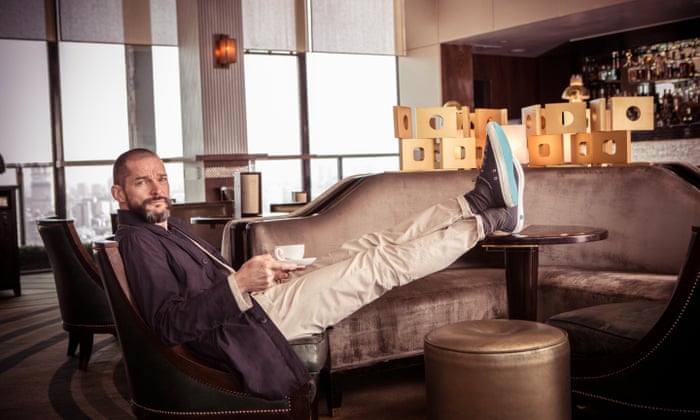 The most charming Frenchman in London is sipping peppermint tea and dishing out heavily accented lessons in the art of love. “If you don’t have self-love, how are you going to love someone else? It’s about confidence and being happy. Then someone will want to be happy with you,” Fred Sirieixdeclares, sitting on a low armchair in the 1930s-style bar at Galvin at Windows on Park Lane in London, where he has been maître d’ for 10 years.

What makes this fine-dining expert such an authority on love? For three years, he has been the host of First Dates, Channel 4’s dating show, filmed in a restaurant in which every diner is on a blind date. It has become a primetime hit and the format has now sold to production companies abroad. But it is Sirieix who largely steals the show, by twinkling his clear blue eyes straight down the lens and doling out aphorisms: “No man is an island”, “Everybody needs someone to cuddle with”. Today, he does not disappoint, quoting Sartre, Shakespeare and Philip Larkin, while explaining how the art of service and the art of love are inextricable.

Sirieix has lived in England for nearly 25 years, since arriving aged 20 to work his way up in the restaurant business. He did “almost every job in the industry” at La Tante Claire, Le Gavroche and other top restaurants before landing at the Michelin-starred Galvin at Windows on the 28th floor of the Hilton Park Lane. He is passionate about the way the restaurant industry is seen, heading a consultancy business, creating a National Waiters Day that includes a waiters’ race through London (contestants run while holding a tray with a full bottle and glass of water, based on an old French tradition called “la course des garçons de café”). In 2011, he mentored young trainees as part of a BBC programme, Michel Roux’s Service(think Jamie’s Kitchen, but for waiters and sommeliers). “There’s an issue in Britain with the image of the industry,” Sirieix says. “It’s not something careers advisers in school recommend that people do. I would like that to change. It’s a fantastic job. Yes, we deal with more people than most, but what is better than connecting with other people?”

This is an obsession of Sirieix’s, and clearly one of his greatest strengths, not only at work and in the First Dates restaurant, where he makes nervous daters feel at ease, but in the London boxing ring where he trains daily and spars at the weekend. “As in service, and in love, and in the ring, you’ve got to connect. If you really want to connect, you will. Like Sartre said: you must act your passion before you can feel it.”

When a (genius) TV producer approached him to join the First Dates restaurant in its third series, he was anxious. “I wasn’t sure at first. I wanted to know that it was a good show at heart. What I like is that we match people to find love, we don’t set them up to fail. I like to get involved when I can, looking at the details of applicants, putting them up on the wall, trying to find their match. I have had years of experience meeting people and quickly getting an understanding of who they are and what they need. It’s what I do all day.”

Sirieix clearly cares about the daters, reeling off favourite matches. “Victoria and Scott were really good” (the couple returned to the show on Valentine’s Day this year, and Scott proposed in the restaurant). “Jo and Naomi were both such good, beautiful and funny girls. I knew it would work, for sure. And Adam and Dan: there was just something about them.”

The question, this self-styled guru says, is, “Do you want to connect in the first place? Some people think they do, but they don’t. Some people do, but they are too scared, they are traumatised by love. I’ve been very lucky all my life, to be born into a loving family who always made me feel like I was loved unconditionally. Some people don’t have that.”

Watching the show, you get the impression that some daters would rather be sitting opposite Sirieix than the person they’ve been matched with. Alas, he’s taken, and lives with his partner and two children in London.

That doesn’t stop him sharing his expertise. Rule number one? “Focus on your conversation and give your date undivided attention.” And what to wear? “Always dress the part,” he says. “I have made some mistakes in the past. I still got my way, but I wouldn’t do it again.” He laughs, finishes his tea, gives me a kiss on each cheek and takes up his position at the front of the restaurant, ready for the lunchtime rush.

Can I take you to dinner?
“Smile at your date and give them all of your attention. You must stay focused on what you want. It’s like steering a boat: you have to know where you are going. And be open: if you hold back, not only will you not reach out to someone, you won’t be reached.”

Fancy a walk in the park?
“You might take a bag with a blanket, so you can sit down if it’s sunny. Why not take a bottle of champagne with a couple of glasses? That sounds rather nice.”

Let’s go for a coffee
“This is a great suggestion for a date, because it implies just five minutes. But towards the end, you have to decide whether you’re out or in. Either suggest another coffee, or pastry, or make your excuses.”