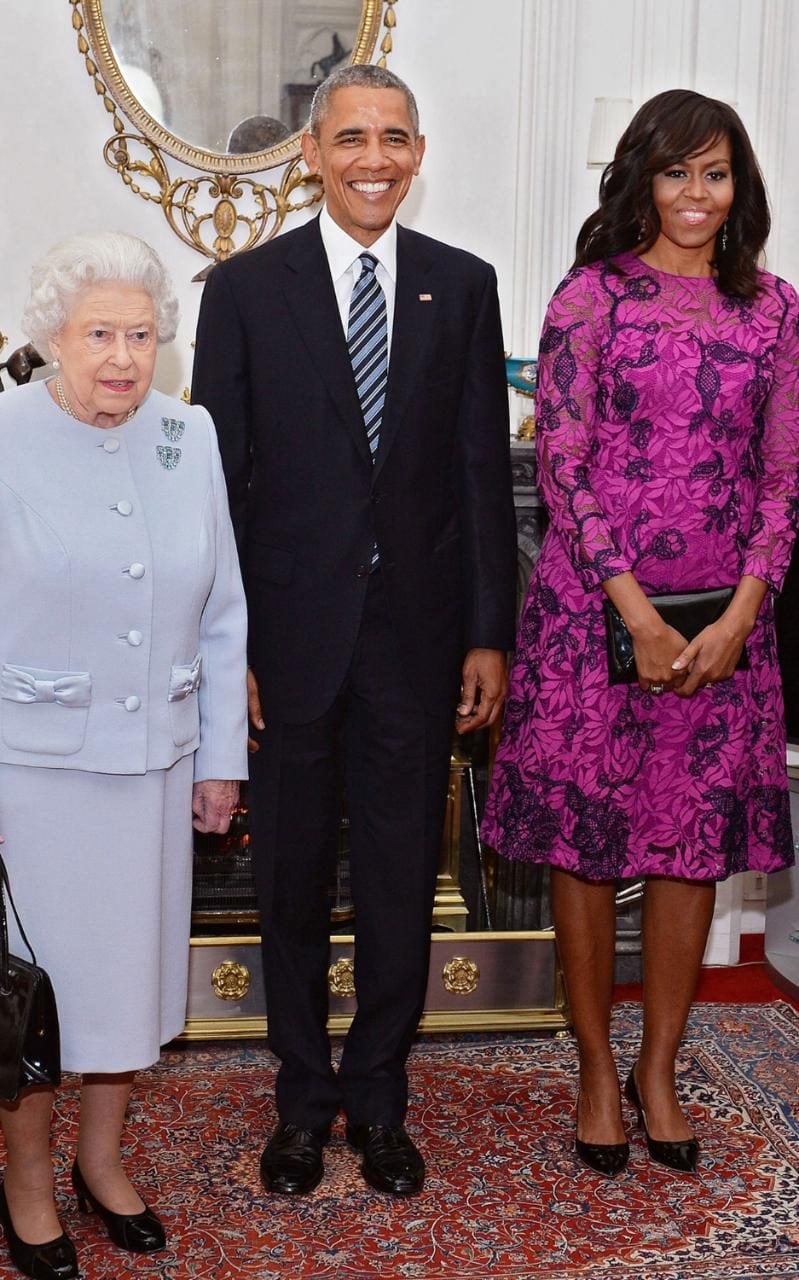 For lunch at Windsor Castle to celebrate the Queen’s 90thbirthday today, Michelle Obama once again embraced her love of bold, vibrant colours, choosing a fuschia lace dress with a floral navy lace and beading  from American design house, Oscar de la Renta. The mid-length style had a befittingly joyful feel for the occasion but also holds a deeper meaning.

The Anglo-American special relationship might be a key talking point in politics right now, as President Obama made his case for the Remain camp in the Brexit campaign, but the bond extends to fashion too. Shortly before his death in October 2014, legendary American designer Oscar de la Renta appointed Peter Copping, an Englishman who was previously creative director at Nina Ricci in Paris, as his successor. The dress worn by Michelle Obama today will therefore have been designed by a Brit helming an American mega brand. It’s a clever tie-up. 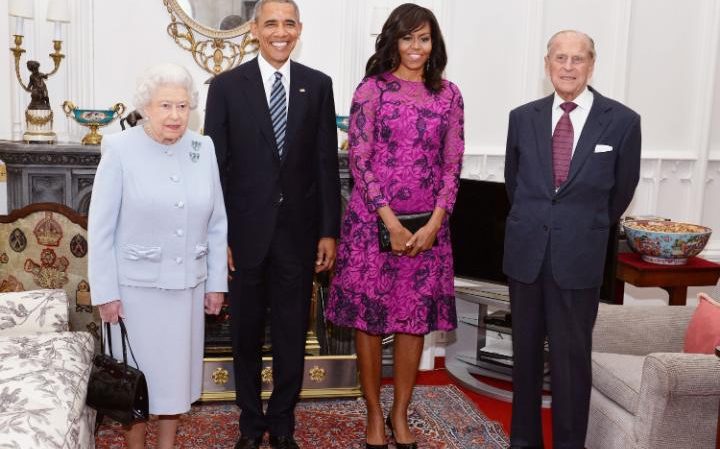 This is not the first time that Obama has chosen Oscar de la Renta, a label renowned for its romantic, beautifully crafted designs. In October 2014, she wore a black, gold and blue cocktail dress in the same fit and flare silhouette as today’s choice to a Fashion Education Workshop.

However, given that de la Renta was at the time one of the most celebrated American designers, the ‘first wearing’ came rather late in her time as First Lady, almost seven years after first entering the White House.

It was widely speculated that her decision to distance herself from de la Renta’s designs was precisely because he was already so synonymous with first lady fashion, having dressed them all- from Jacqueline Kennedy to Laura Bush. Instead, Obama had been promoting younger designers such as Jason Wu, who created her gowns for both of her husband’s  Inauguration Balls.

This seemed to create tension with de la Renta. When Obama wore an Alexander McQueen (i,e British, not American) dress at a Chinese state dinner, he  told an audience in New York, ‘She’s a very good-looking lady and it’s her own right to wear what she wants to wear.

But I was upset when the Chinese Prime Minister came to visit and she wore a foreign designer. ‘What a lost opportunity to showcase our industry. I’m sure she didn’t do it on purpose, but she was not well-advised.’

Today’s choice offers a fresh chapter in the Obama/ de la Renta story. Oxford-born Copping is widely admired in the fashion industry for his exquisite  creations which marry fairytale opulence with a fresh, modern mindset. He said it was “a  shared a belief in fashion romance” which  brought him and de la Renta together. Copping was anointed as the Dominican Republic-born designer’s successor just days before his death from cancer at the age of 82.

While de la Renta rose to fame for dressing the glamorous ‘ladies who lunch’ set, Copping has developed the label to give that same unashamed  femininity to a new kind of woman. “Our younger customers aren’t flying to Paris with their mothers to get fitted for couture. Some of them are coming to Oscar after building their own successful businesses.

They want to look beautiful and glamorous, and they want details that thrill them, but overall, the fantasy has changed,” said Copping. What these women want is outfits for business dinners, fundraisers… and lunch with the Queen.