For a TV show centred around dragons, sword fights and the political machinations of the medieval Seven Kingdoms of Westeros, it’s perhaps surprising that anyone cares about the clothes on Game of Thrones. But such is the cult status of the series -which returns to Sky Atlantic tomorrow – that even the costumes have become fetishised.

Designer Manish Arora sent warrior princesses walking down the catwalk as the Game of Thrones theme tune played last year and Madonna once called the show’s producers to ask to borrow Daenerys’s dress for a fancy dress party. “We couldn’t believe it was really her at first and as we weren’t filming, someone had to scuttle around and find the dress,” Game of Thrones costume director Michele Clapton tellsThe Telegraph of their star enquiry. “When she sent it back, she included a sweet note saying, ‘My son worships this dress more than I’ve ever known anyone worship something before’.”

Clapton – who has designed costumes for the last five series of Game of Thrones – believes that the costumes have such resonance because they are so much part of the plot. “I love the fact that you can have a sub story going on because the costume is telling you so much that words aren’t saying at that moment,” she says, citing the fact that Daenerys always wears hidden trousers and boots under her dresses. “There’s always a fear in her that she will have to leave so it gives her the freedom to always escape and run. If she had silly shoes on she’d lose all her strength.” 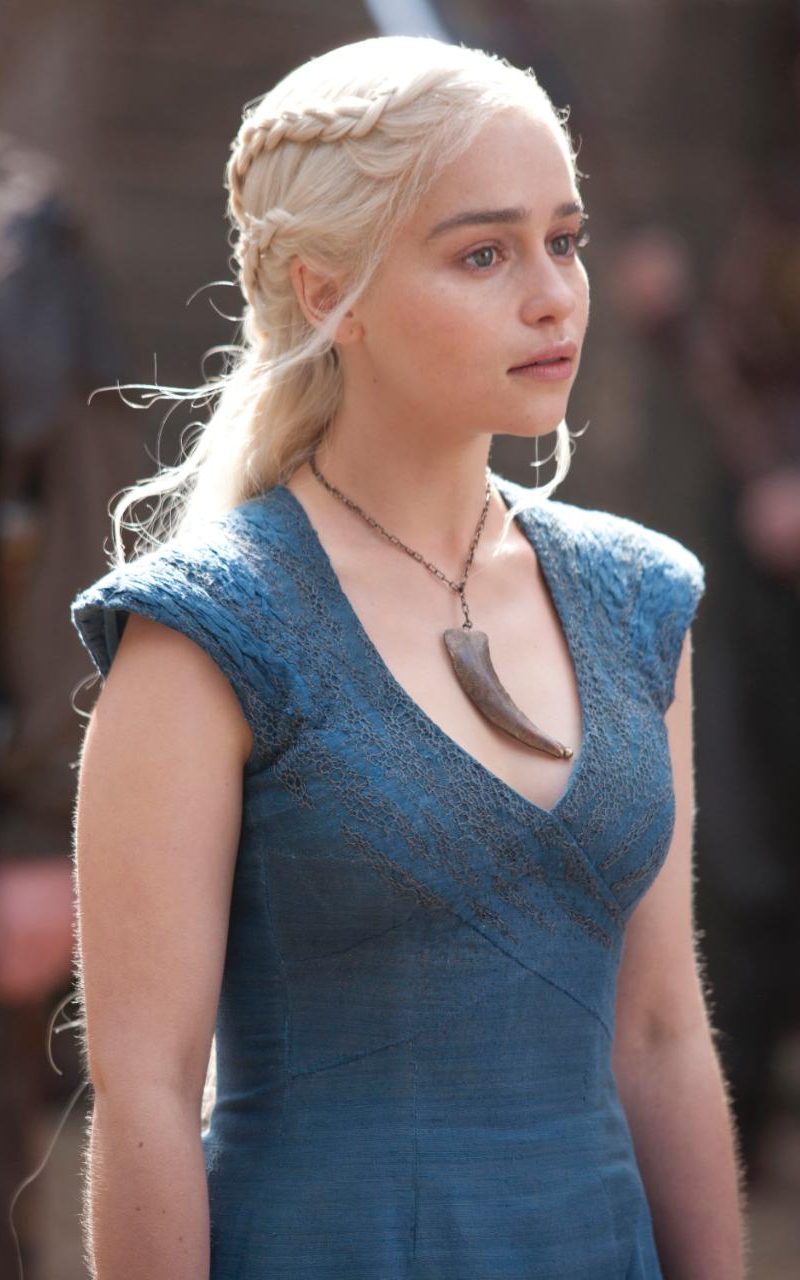 Given there’s barely an episode of Game of Thrones that doesn’t involve liberal amounts of blood, mud and/or snow, (sometimes, let’s be honest all three at once), there are presumably some challenges to keeping costumes pristine? Clapton says that whilst they do try to use blood they can wash out, due to some of the delicate fabrics for a fight scene there will be at least three different versions of the outfit. What are more problematic are the scenes where clothes are violently ripped off – most controversially seen last season when Sansa was raped by her new husband Ramsey on her wedding night. “If they rip costumes off people we’ll have two of those and as one has been ripped we’ll be stitching it back up while the other one is being used and then it goes back and forth and we swap them in and out,” she says. “Poor Sansa gets her stuff ripped off all the time.”

The most controversial costumes

The explosive reaction to Sansa’s brutal rape was proof of just how divisive Game of Thrones has become. A US senator made headlines when she came out to condemn the graphic scene, which didn’t appear in George RR Martin’s novels on which the TV series is based. Clapton, too, has felt the force of die-hard GOT fans – 8.1 million of whom now watch every episode. “The Unsullied costumes were the hardest to make. They were very specific in the book about having a spike on top of the helmet but it looked too German First World War so we had to change it,” she remembers. “With a book people have built up an image of how they think characters should look and then I come along and don’t make it like it is in their heads.”

Criticism of her costumes has come from other, more unexpected quarters, too. Anti fur organisation PETA got in touch when the series first launched to object over her use of fur – a sentiment some of the cast agreed with. “Certain actors won’t wear it and we’ll respect that and we’ll always try to make it in fake fur instead but when you’re depicting the things that we are a lot of the time it doesn’t work,” she says. As a result Clapton hunts out vintage fur from French markets (she insists that they would never commission new fur) to complement the fabrics she sources from Florence or gets woven in Ireland.

What happens to a costume when a character dies?

Initially, Clapton and her team had no concept of how much attention the series would generate so costumes were ripped up and their fabrics reused. “We had to go back and un-dye them so they were restored to how they used to be,” explains Clapton. Today, everything is painstakingly logged and archived – but allowances are made for the characters who are killed off. (Currently 61, for anyone keeping count.) “When people die we sometimes give them little tokens from their costumes. At the end Drogo took his spare pair of leather trousers with him.” (And, before you ask, no – she wouldn’t be drawn on whether Jon Snow’s costume remained in tact.)

The cult surrounding the clothes is so strong that a number go on exhibition each year when filming ends and in July Clapton is launching a jewellery collection with London label Yunis and Eliza  inspired by the pieces worn by Daenerys on screen. “People think the show is about sex but it’s not; it’s about strong individuals and women like Daenerys in particular,” Clapton concludes. “That’s why this show is so brilliant – rarely do you get the chance to see those women represented on screen; let alone the chance to dress them.” Something tells us Madonna will be first in line for a Mother of Dragons necklace.